The room is packed full of adults, mostly mums. Their children are all quiet and sitting without making so much as a boo!

Rolling on the floor, legs in the air and giggling happily to himself…  I find myself gazing down at the most important part of my life, my 18 month old toddler… who doesn’t seem to notice that we are at a special event that requires us to be quiet and stay in our seats. Try not to feel embarrassed and just let him be, I think to myself. But then he stands up, looks back at me with that cheeky smile that I adore – except not right now because it means he’s ready to run the opposite direction, down the aisle towards the stage, where there is currently a speaker giving their talk to an audience of writers – who may be right now writing about my little show stealer.

Oh no, please no, just come back to mum and sit in my lap, please, I plead with him in my head… Off he goes, so I make a quick move to pick him up, and as I do he throws his hands up above his head and slips through my hands as he half-cries and half-giggles. I manage to somehow hold my slippery 14 kilo toddler as he tries to wriggle out of my arms, and we make it back to our seats. I bring out the strawberries that I prepared for him this morning, nicely cut into safe to chew quarters. See, I do have it together for my kid, just not here at this gathering. He sits down and begins eating the strawberries. Hooray! Maybe we will make it to the end of this quiet time without any more attention on us.

I listen to the speaker and laugh at their jokes, as I look down at my son who is happily eating his strawberries. I notice him drop one onto the carpet. Oh no, please don’t eat that! I think in my head and hope he won’t be able to grab it before I can give him another strawberry piece and remove that germ city piece. As I reach down, trying to remain calm cool and collected, he picks up that piece. That wet, germ infested, bacteria party of a piece of strawberry and he quickly shoves it in his mouth before I can even attempt to take it. Toddler – 1, mum – 0. The lady sitting beside me must have noticed. I could attempt to say that this isn’t typical, but it is… my son can’t count yet, so the three second rule is an infinity rule. He sees something he wants to eat, and well, he eats it. But the meals that I have spent ages working on preparing, making sure they are nutritional, able to be picked up by him, easily eaten, often get thrown to the dogs as he giggles away, or they get mushed into his curly blonde hair where they become dreadlocks for me to attempt to get out at bath time.

The toddler year…or years. How long is a child a toddler for anyway? Lesson learned today. If I am ever invited out in public again, either take a friend who can help with my gorgeous little boy, or don’t go. 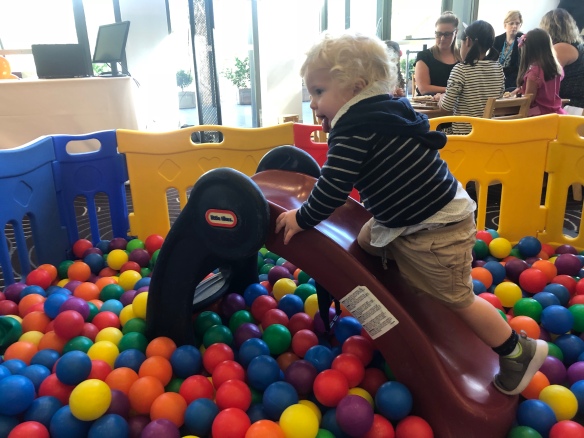 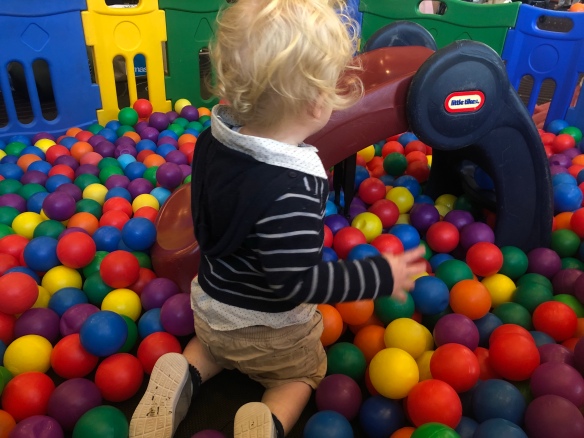 That was just the beginning of a very long few hours that I had envisioned to be a really fun day out for the two of us. He proceeded to become a screaming, crying, jellyfish of a toddler at any attempt to keep him contained or quiet. I took him over to the play area that I thought would be great… right up the very front of the audience, to the immediate right of the stage. There I sat with him as he played, and became fascinated with one of the speaker’s children, until she left the play area. When another older girl entered the play are, I thought things would be better because my boy was a lot smaller than her. When he tried to climb up the baby slide, she grabbed his head and pushed him. My mummy instinct wanted to tell her to stop, I refrained. But then she did it again and my boy went flying down to the ground. That’s enough, I thought, and picked up my boy to return to our seats. Remember we are at the front of the entire audience. As I pick up my boy, he becomes a jellyfish with Aerosmith’s loud voice. Don’t look up, don’t make eye contact with anyone, I thought as I made the long walk back to my seat. I had become ‘that mum’ with ‘that kid’ throwing ‘that tantrum’ in public. As I sat down I found the almost dry snot in my hair, probably from my earlier struggle with the jellyfish, and the strawberry hand stains on my shirt. I have to giggle to myself, right as my son is off again…

That’s motherhood right there isn’t it? I’m not complaining, no way. I waited far too long for this miracle in my life to complain. But I am telling it like it is. In those 7 years waiting for this blessing, I knew that motherhood would be no walk in the park, but what I didn’t realise was that it would be a hike in the terrain as you get drenched in anything and everything (including, snot, spew, and anything else you can think of), without hardly any sleep and while onlookers judge your every move. I didn’t realise how much other mums judge mums. I guess we are all guilty of it at some point, but it just never dawned on me just how much mums judge mums. I also didn’t realise that some babies just don’t really sleep… Sleep when the baby sleeps is one of the dumbest lines I’ve heard because how are you meant to sleep when you have a cat napper?

I’ve been so blessed to have our IVF community of the babies that were all due in November but came at their own times. Of our group of 54 mums, we never judge each other. Not once has anyone judged another. We are a sisterhood that support each other through all of life’s highs, lows, rollercoasters and everything in-between. That is what motherhood should be like… sisters joining together to support and not pass judgment.

Anyway, the day was rather disappointing. Other writers were walking around loaded up with freebies and bags that the stall holders were giving out, but each one I went to seemed to have run out early. Yes, we arrived later than I had planned because it was so hard trying to leave the house without looking like a scene from a horror movie; trying to do anything to make myself half-okay was near impossible with a toddler that was in to everything and then tantruming if I left his side for a minute.

I left the brunch a bit deflated, travelling all that way (one and a half hours each way), feeling so stressed trying to take care of my world (aka my toddler) who was just being rather interesting (aka difficult) today and then missing out on the freebies that had lured us there to begin with just made the day feel long and hard.

As I walked around the beautiful location of the event, and attempted to talk to stall holders, my little adventurous child was on the look-out for food and other things he could taste test. Next stop was the food table. He devoured watermelon. That juicy watermelon smelt so delicious. No, I didn’t get to taste it because I was juggling a toddler and a waterfall of watermelon juice that was saturating his hand-me-down special light-coloured collar shirt that was now pale pink. And while juggling him, I could feel my own shirt and pants turning a beautiful watermelon shade of wet pink. His designer qualities are already coming out as he redesigns our clothing colours.

My curious boy enjoyed the attention of onlookers as he tipped out the natural play area toys. He loved those toys, and then he saw the clear plastic cover for the earth natural storage box. Before I could get close enough, he had it up and pressed against his face making a blowfish as he began to run. The educators were giggling away and he was smiling that cheeky smile. I do wish I had photos of this as it was pretty hilarious. An 18 month old stealing the attention of so many – he really is adorable. Just picture that and then picture me chasing him to attempt to stop him falling over and injuring himself.

Time to go, after the prize draws had all been drawn, of which we were not chosen because, really our last name should be Murphey (Murphey’s Law). On our way to the car, he saw the children’s park. So we made a stop there for him to run out all of that energy that I wish I had even a quarter of. I was so proud of my boy. He went down the slide – this is something that seems to scare him. And then he wanted more. He kept signing “more” with his hands.

After a while it was time to head home and try beat the peak traffic… hmmmm, to top off our rather full-on day out, we sat in peak traffic coming home. See, I really should have been called Murphey. As soon as we got home, as my world (aka my son) had already had a sleep in the car so he was ready to be his usual happy self again. We ran around the yard together, pretending to hide from the dogs and then chasing the dogs, watching the kangaroos and the cows, then seeing the chooks. The afternoon was bliss. Motherhood that I had imagined.

That’s the reality of motherhood. There are days, moments, times when things feel so hard, stressful, draining, exhausting, overwhelming, and then there are these beautiful silver lining moments on these days to remind us just how wonderful motherhood is, and to remind us that perhaps we aren’t crap mums with uncontrollable toddlers. We are mums, doing the best we can to love, to nurture and to support our children as they grow and develop in a safe and secure way.

Oh that laugh, as I chased him and as he chased, me echoes in my head now as I share a snippet of our lives with you. As I sit here smiling, I can’t help but think that I am the luckiest person in the world. I get to be his mother. We get to do life together. That right there is the most wonderful thought and blessing.

I think of the 6 babies that went straight to heaven before we could hold them. I wonder if any of them would have had his personality or how would today have gone down with any of them? Would I have even dared to venture out on my own? I don’t know. I think of my many friends on their own infertility path, yearning for a child. Some days I miss that ability to go to sleep and have a full night of sleep. But I wouldn’t trade any of this for anything. My world, my boy, is… well, he’s everything to me. And I guess I’m doing an okay job, he’s happy, he’s alive and he’s so loved.